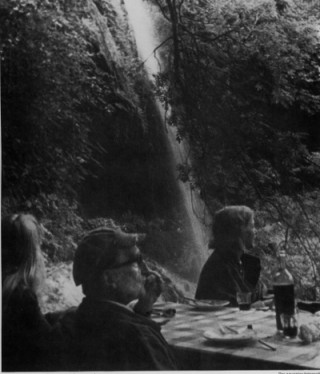 Marcel Duchamp al salt de la Caula
The gathering of Action Poetry and Performance Artists, La Muga Caula, first began in 2005, to commemorate the 40th anniversary of Marcel Duchamp’s visit to the village of Les Escaules. The visit was documented in a 1965 photo. Joan Casellas is a performance artist who has been fascinated with the relationship between Duchamp’s famous work “Etant donnés”, a painting/photo/etc, and the Les Escaules’ waterfall since the beginning of the nineties. In 2005 Casellas marked the 40th anniversary of Duchamps’ remarkable visit to the area by creating a lively festival of ephemeral, conceptual art made up of action poetry and performance art. 2008 is the 4th year of La Muga Caula in Les Escaules.

The Ramirez-Rofastes family has been living in Can Burgas, one of the main houses of Les Escaules, since the seventies. The family, and in particular, Lleonard Ramirez, a spirited and enthusiastic supporter of the arts, encouraged Casellas to start La Muga Caula, and offered him both personal and material assistance to organise the first gathering. La Muga Caula began as an independent initiative but then immediately received support from the local government (Ajuntament de Boadella i Les Escaules), a local cultural group (La Societat Escualenca) and from many citizens of the village who offered accommodation and practical support to make the event possible. In addition, local entrepreneurs like the restaurants El Molí, El Trull den Francesc and the catering company Ben-Q-it also generously contributed to the event. Ingrid Danckaerts, a citizen of Les Escaules and a social activities coordinator, jumped in and took on much of the logistics around the festival, and today handles the technical coordination of the whole event. 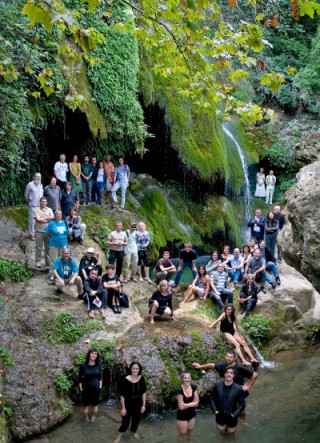 La Muga Caula is an amalgamation of two important words from the village. The river “Muga” runs through the Les Escaules and means “border” in Basque. “La Caula” is the name of the waterfall in the village and refers to the thermal water carried into the village by the waterfall. This reference to thermal “hot” water is most probably also one of the origins of the name of the village and probably also one of the reasons for Duchamps’ visits. La Muga Caula can be seen as a warm and flowing border of cultural exchange.

The gathering takes place annually, and begins the first weekend after September 11th. The organizers stress that this is a “gathering” more than a “festival”, emphasizing the idea of the connection between artists and visitors. For this reason, we have organized accommodation in the village, offering the opportunity to live together during the entire gathering. This also allows that the many different activities can be spread over the whole day.

The concept of "gathering"

The gathering is the result of historical research, the documented presence of Duchamp in the village, and the additional presence of Man Ray and Dalì. So far the gatherings of 2005, 2006 and 2007 have had as a focus the relationship between these artists and the village. Now, after acknowledging the important history of the artists’ presence in Les Escaules, the gathering wants to start a new period of art promotion, one in which posters will be made by important, contemporary artists in the field of action poetry and performance art. They will create the image for the posters and also participate in the gathering.

The 2008 gathering will start off this new cycle with the work of action poet Julien Blaine. Besides the standard performances, expositions and conferences, this year’s programme will introduce new elements: documentary photography and videography and a visiting curator. 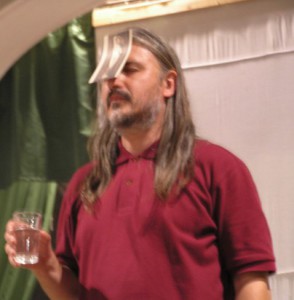 Plastic artist and documentary photographer specialised in performance art. Born in Teià , Barcelona on May 24th in 1960. At the age of 10 he starts painting and at the age of 14 he start art academy (L’escola Massana) in Barcelona. Influenced by conceptual art in 1976 he realises his first performances and ephemeral interventions with the group “Dada strikes again” which he creates with other study companions. Afterwards he realises objects influenced by Marcel Duchamp and Joan Brossa. He was a founding member of the following projects: CLUB 7 (1996-98), LA RED ARTE (1995-1998) and EL KABARET OBERT (2002-2008). He has organised expositions as DOCUMENT-ACCIO (1999) and annual gatherings of action poetry and performance art like La Muga Caula (since 2005). 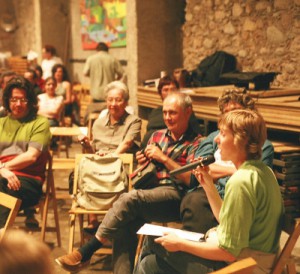 From Belgian origin, Ingrid works and lives in Catalonia since 2002. She holds a diploma in social- cultural work and a master degree in human sustainable development. Her involvement in different social and cultural international projects and her relationship with the village, Les Escaules, where she lives all year long, made her the right person to take on the technical and logistic side of this artistic gathering.